Our site is reader-supported – by clicking our links, we can match you with a potential supplier, and we may earn a small commission for this referral. Learn More

If you’re thinking seriously about moving to Finland, paljon onnea! (congratulations!) You’re set to experience all sorts of wonders in the happiest country in the world, from its beautiful lakes, forests, and northern lights to its consistently progressive attitude.

But before you become one of the 5,600 American expats enjoying life in Finland, you’ll want to make sure you know what kind of healthcare you’ll have access to once you arrive.

And if you want to join the 1.2 million people in Finland who have private health insurance (OECD, 2019), check out our list of recommended healthcare providers. From there, you can request free quotes from whichever company suits your needs.

What’s on this page? 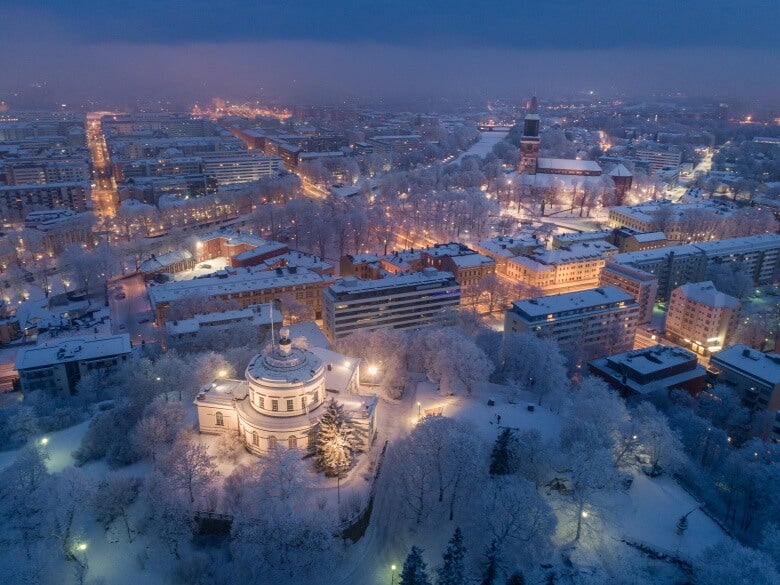 Finland is beautiful all year round, but particularly in winter

How does the Finnish healthcare system work?

Finland has a decentralised universal healthcare system, which means the government funds the country’s healthcare, but doesn’t provide the care directly.

Instead, the central government gives funds to local authorities, employers, and private medical institutions so they can provide subsidised health services to their citizens, employees, and customers, respectively.

Attempts over the past two decades to centralise and improve a network built to serve a scattered population with wildly different needs have been met with fierce challenges – but that’ll be a familiar story to Americans.

Unlike in the US, however, the NHI scheme covers all Finns who are registered with the authorities. It provides a range of health services at subsidised rates, including some from private institutions.

NHI is run by Kela, an independent social insurance institution which is supervised by the Finnish parliament.

The following services are partially or fully covered by NHI for all registered Finnish residents:

The NHI effectively subsidises occupational healthcare as well, seeing as Finnish employers are compelled to provide health services to their workers, and the NHI covers half of these costs.

There are also multiple compensation schemes. For instance, if you lose your income due to your medical condition, you can claim sickness allowance for up to a year.

There are similar allowance schemes for people with disabilities and those seeking rehabilitation.

As Finland has a small but prosperous population of 5.5 million, many of the most demanding conditions are treated by one medical institution alone.

Is healthcare free in Finland?

It’s as close to free as Finland can afford.

As is always the case with universal healthcare systems, the government uses funds taken from taxes to pay for the majority of expenses – 75%, in Finland’s case.

This is supplemented with out-of-pocket spending from the public, who pay a heavily subsidised fee for each service. On average, residents pay $832 per person, per year, according to the World Bank.

That’s the twelfth-highest amount in the world – which places Finland nine places behind the US, whose residents pay $1,148 per person in annual out-of-pocket fees.

Quality of healthcare in Finland

Finland has the sixth-best healthcare of any country in the world, according to a 2018 study published in The Lancet and funded by the Bill and Melinda Gates Foundation.

That’s especially impressive, considering the country spends 9% of its GDP (Gross Domestic Product) on healthcare, compared to the US’s 16.9%.

All that money gets the US to 29th place in the Lancet study, sandwiched between the Czech Republic and Croatia.

Finns live an average of 3.2 years longer than Americans, according to the World Bank, and the country has the joint-lowest infant mortality rate on Earth – 3.5 times lower than the US.

Finland’s maternal mortality rate is the joint-lowest in the world, at three deaths per 100,000 live births, while the equivalent figure in the US is nearly five times higher.

Are there any issues?

There are still problems, though. 5.6% of Finns reported having unmet medical needs in 2019, mainly because facilities were too expensive, were too far away, or placed them on a long waiting list.

Passing national healthcare reforms through parliament is also extremely tricky for Finnish governments, with one failed attempt in 2019 leading to the entire government’s resignation.

Without reforms, the system will struggle to afford to meet the needs of its aging population.

Finland is home to Santa Claus Village and hundreds of reindeer

Healthcare in Finland for foreigners

If you’re a legal resident in Finland, you have full access to the national healthcare system.

Going to Finland for work? No problem.

You’ll then be able to access public healthcare services, and may also receive occupational healthcare – though you’ll have to check with your employer about that.

If you move to Finland to study, you’ll be entitled to access your local municipality’s student healthcare services. You can also access the public healthcare system if you’re a resident in the country.

Temporary visitors from the US – that is, those coming on holiday – are only able to access emergency treatment, and may be charged for the cost of whatever care they receive.

21% of people in Finland have private health insurance, according to the European Commission – about 1.2 million – and you can skip all of the complications by joining them.

If that sounds good to you, check out our list of recommended healthcare providers. From there, you can request free quotes from whichever company suits your needs.

Do I need health insurance in Finland?

If you’re allowed to live in Finland, you should be allowed to access public healthcare. Make sure you check that with your nearest Finnish embassy, though.

But if you want to be covered for pretty much every eventuality, and enjoy knowing exactly how much you’ll have to spend on healthcare each year, we’d recommend getting some private cover too.

And if you have a private policy, you can still ask Kela to reimburse you for medical expenses, as well as asking your insurance provider for compensation.

How much does health insurance cost in Finland?

If you’re going to Finland alone, and want to be covered against the costs you can incur through repeated trips to a hospital, you can get private coverage for around $115 per month, with zero deductible and no out-of-pocket payments.

You could pay as little as $118 to cover a family of four in Finland, but you’re more likely to have to shell out around $450 – though that is with zero deductible and no money paid out of pocket.

If you want to protect yourself and your family with private medical insurance in Finland, check out our list of recommended healthcare providers. From there, you can request free quotes from whichever company suits your needs.

If you’d like to know more about your new home, your first port of call should be our page on the top 21 things to know before you move to Finland.

We’d also recommend our article that specifically caters to people who are moving from the US to Finland.

Josh is a Londoner, an Arsenal fan and a lover of travel. His dream holiday would involve Japan, India, Australia and a great deal of food.